Like all Austrian winegrowing regions, the Weinviertel is in the second-coldest of seven zones in Europe defined by their climatic suitability for viticulture. In the region where a humid, mild Atlantic climate gives way to a dry, continental climate with Pannonian elements, viticulture benefits from a cool climate. The Weinviertel is located on the western edge of the Pannonian climate zone in eastern Austria and is characterised by continental influences that bring warm, dry summers and cold winters with little snow. Sunny autumn days, cool winds from the north and significant fluctuations in the daytime and nighttime temperatures create perfect conditions for fresh wines with intense aromas.

The Weinviertel borders the Danube in the south, the Czech border to the north and the Slovakian border to the east, while the Manhartsberg ridge forms the eastern fringe. There is precious little precipitation in the region – only about 500 millimetres per year, especially in the western Weinviertel with the town of Retz as its capital. Retz was the driest place anywhere in Austria in 2018, with only 386 millimetres of rainfall. The dryness of the region around Retz is the result of its location at the foot of the Manhartsberg ridge, whose eastern flank is completely in the rain shadow. The hilly landscape of the western Weinviertel, which is 200 to 400 metres above sea level, causes microclimatic differences that, in addition to the predominance of Grüner Veltliner, also favour red grape varieties. This is particularly true in the Pulkau valley, around the viticultural villages of Haugsdorf and Jetzelsdorf, and in the valley basin of Mailberg. Red wine ‘islands’ with favourable climatic conditions can also be found in the northeast, in particular the villages of Herrnbaumgarten and Schrattenberg.

In Retz, the annual average temperature for the period between 2009 and 2019 was 10.49 °C. The sun shines for 1,968 hours per year here, but temperatures further east are a little warmer. In Poysdorf in the northeastern Weinviertel, the annual average temperature is 10.55 °C with total annual sunshine of 2,084 hours. However, there is a little more rain in Poysdorf, where the average annual precipitation between 2009 and 2019 was 578 millimetres. Further to the southeast, around Mannersdorf, the Marchfeld plain encroaches and the Pannonian influence grows. Very warm air masses flow in from the Pannonian plain in the south and southeast. In the town of Wolkersdorf near Vienna, the annual average temperature for the past decade has been 11 °C, coupled with annual rainfall of 557 millimetres. 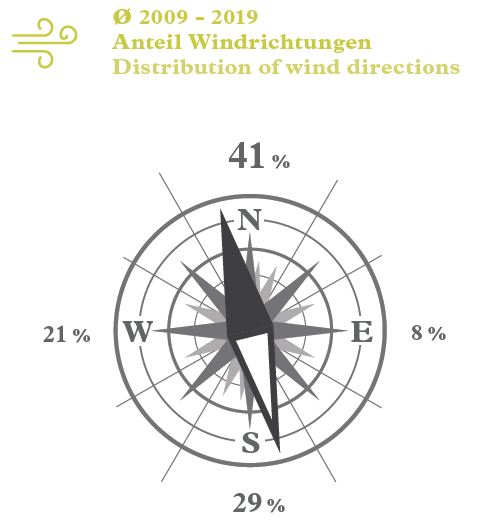 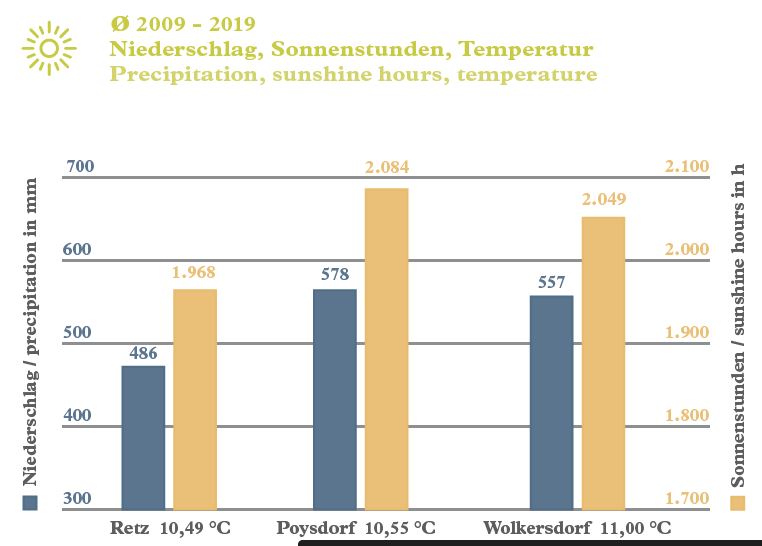 The Weinviertel is famed for its typical Kellergassen (wine cellar lanes) that mark the landscape...

Weinviertel - Home of the „Dash of Pepper“ The Weinviertel is located south of the...