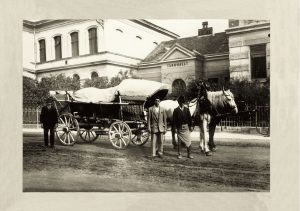 Little value was placed on grape varieties up into the 18th century. Mass cultivars were planted to achieve the highest possible yield volume. Due to their high acidity, it was necessary to mature these wines for a prolonged period in barrel to please the palates of that time. This led to oxidised flavours, which were then consider an attribute of quality. The tastes of wine drinkers have changed drastically over the centuries and the oxidised wines of former times would no longer be accepted.

Because the longer maturation also led to evaporation and the alcohol content was relatively low and larger volumes of these wines could be consumed. Today wines are often drunk in elegant stemware and it is difficult to imagine that they were formerly consumed from jars or ceramic pots.

Following, several varieties are mentioned that were mentioned early or are widely distributed and of importance in the Weinviertel.

The mention of specific grape varieties occurred rather late, which is also due to the lack of publication of exact scientific descriptions. One exception is “Raiffal”, presumably a sweet wine grape variety from Istrian, which can be traced to Matzen in 1551. The so-called “Groben” were very common mass cultivars throughout Austria. The “Schwarzer Burgunder” was mentioned in Grossschweinbarth in 1777, which plays a role in today’s viticulture as “Blaufränkisch” and was the predominant red wine variety in the Weinviertel well into the 19th century.

The “Grüner Muskateller” first appeared the 18th century and quickly developed to become a mass cultivar and was the most widely spread grape variety in the first half of the 19th century. This name stood for what we today call “Grüner Veltliner”. During this time the “Blauer Portugieser” also arrived in the region.

The most widely distributed red wine variety in the Weinviertel today is Zweigelt. This variety is a new crossing developed in 1922 by Friedrich Zweigelt, who later became the director of the Federal Education and Research Institute for Viticulture and Pomology in Klosterneuburg. This variety was initially called “Rotburger”, but was named after its breeder by Lenz Moser in 1975.